The developers are testing different approaches to accommodate varying hitboxes between the races.[1]

More than likely we'll have some sort of unified or unified-ish hitbox. But again it's going to probably have a unified hitbox with some exceptions or some special sort of collision rules based on them as opposed to kind of just making it smaller for one and not the other.[1] – Jeffrey Bard

We don't have separate types of hitbox categories, for example. There's no head hit box in the MMORPG like there was in APOC. So from a critical standpoint you're not going to see a greater risk of critting for a larger hitbox.[1] – Steven Sharif

The Ashes of Creation MMORPG will have a time-to-kill (TTK) of around 30 seconds to a minute.[2]

In the MMORPG we really don't want to see any one-shots. The time-to-kill needs to be strategic and tactical.[4] – Steven Sharif

There are no headshot mechanics in the Ashes of Creation MMORPG.[1][5][6]

There will be directional attacks (back attacks, flanking attacks, frontal attacks) that deal additional damage depending on the positional context of the attack.[10] 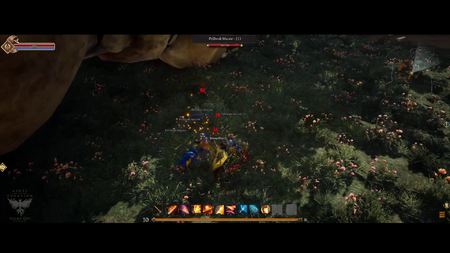 As I attack I am hitting multiple numbers of these opponents; and that's important because all weapons, regardless of whether you are in reticle mode or tab-targeting mode will be able to have a action-based type weapon attack. Not active skill, but weapon attack.[11] – Steven Sharif

All weapons have a forward attack cone, regardless of being in tab or action mode.[11]

Polearms for example will have a much wider arc and much further out. Daggers will have a more fine-tuned arc, so you have to be more precise in that regard.[11] – Steven Sharif

This is described as a weapon attack not an active skill.[11]

Part of what we're exploring with this approach of our hybrid combat is offering the player the functionality to utilize either tab targeting or a reticle-based action camera mode; and you know there are benefits to each; and both of them are providing the player what they feel most comfortable with playing. All of our attacks are going to be stat opposed unless they're a templated attack, in which case there will be certain bonuses and/or stronger applied chances for certain types of CC effects to be applied or potentially evasion and accuracy aspects of it. These are all things that we plan to to test throughout alpha two to see where the player base lives in those two options of the action or tab target based attack modes. The important part here is that this is still a work-in-progress. This is meant to give you a look at where our approach has now been living over the past several months when it comes to combat based off of what we learned in alpha one, what player feedback has been along the way and how we can create a compelling system of combat between these very different classes and weapon types.[14] – Steven Sharif

Hybrid combat refers to the choice between tab targeted and action targeted combat in the Ashes of Creation MMORPG.[15][16][17][18]

One of the differences between tab and action combat mode is you can launch projectiles in action combat mode as a blind fire option, and if a target or if something moves in the way between the time of that projectile launching and impacting either its max distance, or a piece of terrain, or another target, it's possible that players might move into that projectile.[27] – Steven Sharif

Skill progressions, skill point allocation is determined by the player. The player will be able to choose either more tab-target oriented skills or more action-based skills and customize their playable experience to what accommodates their preference. From a balancing standpoint for us developers, we need to make sure that certain abilities house certain functions so that there's a balance between skill shots and tab-target abilities.[28] – Steven Sharif

As an example: Let's say you're playing a ranged class. You could have an action-oriented power shot in your skill tree or you could have a single target power shot that ramps up and does more damage.[30] – Steven Sharif

Q: What the benefits are for tab versus action. I feel like a lot of people feel like tab is just easier so why would I use action?

A: If you're in a massive brawl, the ability to pick and choose targets that are far in the back line that might might be more advantageous towards tab target users because they're able to click, but the reaction time to acquire a target for a cursor versus acquiring a target for a reticle is much faster and less cumbersome because it doesn't require as many actions on behalf of the user.[34] – Steven Sharif

You'll notice as I go into action mode, I have my reticle and when my reticle hovers over an enemy target, it'll turn red, essentially showing like "hey we know you have a valid target hit" that you can see; and when you press Q you can lock on to that target. You can also hold Tab to alternate between targets. So like that's an important aspect of the combat that we're trying to incorporate, which is mixing and meshing between tab and action, so you still have that action component but also are available to use some of your tab targeted skills.[17] – Steven Sharif

There are player and spell collision mechanics in Ashes of Creation.[38]

Another thing that's important about these action combats is the ability to dodge and moving out of the way of certain skill shots.[40] – Steven Sharif

Evasion moves such as dodging and weaving will be present in Ashes of Creation combat.[41][42]

So you see an animation windup that's a telegraph on what's coming; and then you have response actions that you can take as a result of that in order to dodge, weave, move, do whatever. It is both a combination of what your rotation is but also how you have reaction abilities ready to go that you save for certain circumstances that are important.[41] – Steven Sharif

Q: Will there be evade frames/ I-frames on dodge?
A: I would say it's a safe bet with regards to how we're approaching the hybrid combat that not only are gonna have true evasion skills that apply to more action-oriented skills that are coming your way, but you'll also have you know I-frame type skills that would apply perhaps to a tab targetable skills coming your way. So I think you're gonna have a healthy balance of both with it when it comes to skills that you can spec into.[42] – Steven Sharif

The developers have yet to finalize designs for active blocking in Ashes of Creation.[45][46]

We're going to be discussing internally amongst the designers and the combat team and then we will likely share with the community once we've nailed down a few approaches and prototype them out.[45] – Steven Sharif

This is something we're still actively iterating on and actively going to be testing in our hybrid system but you know as we're as we're doing that we are taking into consideration. Obviously we want action based components to also interact in some way shape or form with the waterfall stat system as well; and you know that seems like it might be an oxymoron from an action to tab sense, but it doesn't have to be. There can be components of action- so say for instance you could have a dual component where you activate that shield stance and if you accurately intercept an incoming projectile or a skill that's been initiated from the forward arc, you get 80% damage mitigation or 80% application of the physical defense of the shield; and if it comes from an area outside of that forward arc then you get a lesser bonus; and that essentially what would happen is let's say you take into account the stat of the shield's physical defense value, you apply it as a mitigating factor to the incoming damage, but in addition you augment that system with the waterfall stat that is responsible for shield damage mitigation or shield rate; and maybe you know the default skill says 80% damage mitigation from forward arc but that gets augmented up to 87% because of your stat essentially; and if it's not in your forward arc then it gets you know 50% efficacy- maybe it's 40 something percent. So just to give you kind of insight into what goes into kind of determining these skills and how they interact on an action-based front.[46] – Steven Sharif

In APOC when we had the active shield stance- that was an active shield block action-based system; and when we collected design data on essentially the efficacy and essentially the accuracy of players who used that wasn't very high; and there is a concern at least on the front of implementing a action restricted type active shield block as opposed to what would traditionally be along the lines of activating a buff that grants a shield block rate adjustment and is universal on incoming damage- and interfaces with the stats- is really something that we're leaning towards in incorporating for the hybrid combat system.[46] – Steven Sharif