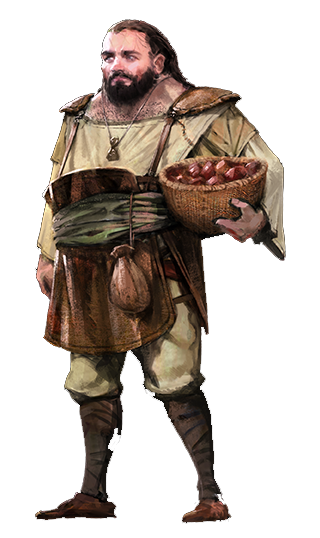 Farming is a processing artisan profession.[2][3][4]

The way farming complements what would be in-the-wild gathering is these are more specific applications of returns: These are timed returns that you can have, leveraging essentially the Freehold system and the areas of that. Now once you have collected that farmed material, that's when you process it into a craftable material or you can take it directly through some of the farming professions into a consumable item, whether that be through Cooking or through Alchemy or any types of those things.[3] – Steven Sharif 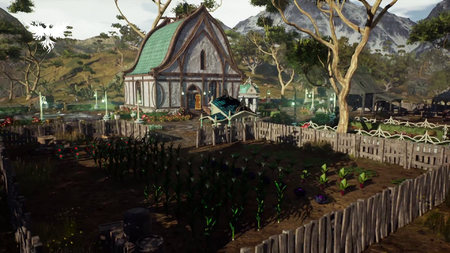 Players may grow crops in the garden sections of their player housing.[5][6]

Crops are intended in Ashes to be a rotational profession that is dependent on having the appropriate seedlings and/or any of the necessary tools.[9] – Steven Sharif

Freehold expansions and upgrades are available as node progression allows. Some of these improvements affects the size of freehold farm plots available for crop planting.[10]

As you draw resources from your surrounding area- what type of effect does that have on the land; and then also how effectively can you draw those resources without having such a deleterious effect on the land, which might impact future resource gathering for some period of time: And it makes relevant the movement of these players who are collecting these goods from the environment, that they actually cannot always just do so in one particular area, as the land management begins to degrade. So it actually encourages movement across the world to discover new areas that might not be as perturbed as the ones you're coming from. It's a very interesting idea. It's something that we're going to be prototyping in Alpha 2 and getting feedback on and testing.[13] – Steven Sharif

It could be could be positive or negative, or both simultaneously. So the land health value ties into the health of a specific ecosystem; and the ecosystem can kind of scale with different segment sizes of the world, or the world itself: A biome, maybe a node, maybe the player's freehold. And the things that a player does in those areas will contribute to health in a positive or negative way. So doing something like rotating your crops might increase the health of the land because that's considered something good to do; and maybe apprehending or removing poachers that are over hunting a certain species could be helpful to the health of the land. Maybe the mayor puts out a request for players to try and get rid of invasive species that are plants- maybe they're overgrowing weed and it's stopping other valuable plants from growing.[12] – Kory Rice 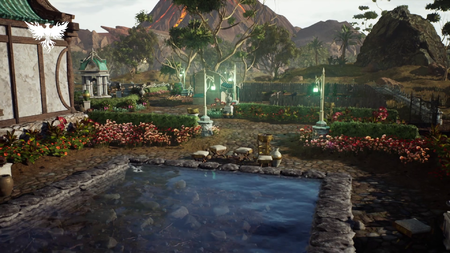 Alpha-1 Fishery on a freehold plot.[8]

You actually see there a small pond, which is actually another type of farmable area that we're going to have available on the freehold system, which is essentially a fishery so to speak. So you know fish play an important role from a raw gatherables a standpoint, but also again because a lot of the components of the freehold system are intended to be processing of raw materials, you know the fishery allows for a focus on specific type of fish gatherables that may only be gathered through the fishery blueprint.[9] – Steven Sharif

A fishery is a farmable area that can be placed on a freehold plot. A fishery allows gathering of fish that are unique to the fishery blueprint.[9] 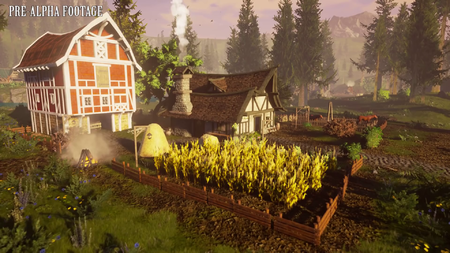 Players may grow crops in the garden sections of their player housing.[5][6]

There won't be a breeding/genetic modification mechanic associated with crops.[7] 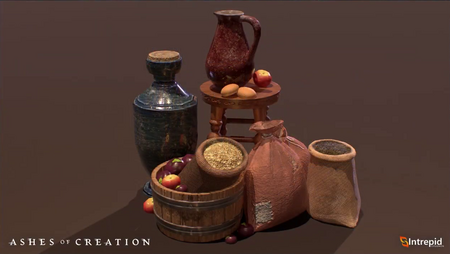 Livestock (and crops) are used to provide ingredients:[4]

If a particular region moves into a season and that week you can't grow a particular type of good, but another region halfway across the world can grow that good; and you talk about moving those goods across regions so that they're relevant to either craft workbenches or you can sell them in the local economies: That is a major indicator of movement of goods and movement of goods carries risks; and risks can create political foes and friends... Something as simple as just a climate can have cascading consequences across the entirety of the game.[19] – Steven Sharif

Seasons affect crops and other herbology resources available for gathering or planting, including how crop rotation is managed.[20][21][22][23]

One of the things that is huge about the season system and how it affects crops and the gatherables in the game is the impact it will have on the economy. When a particular area no longer is capable for a week's period of time, or even potentially longer, of producing a certain type of crop or harvestable; and that has to change across the world regionally, now the transit system of those materials of those gatherables they become more relevant, and they're subject to potential risk; and the prices might go up in certain areas. It is something that is actually very instrumental in the overall design of the economy in the game.[21] – Steven Sharif

It won't likely affect too much on certain resource spectrums like veins of ore. Those might not be affected by the seasons or weather systems, but there might be blockages to cave networks that house those types of ore veins. Alternatively it is going to be significant impact on any type of herbology or plant-based types of gatherables. It's going to have significant impacts on crops that players can plant themselves on their properties; and that they'll be able to harvest. They're going to need to time the crop placement and its maturity window so that it's harvestable and available to be harvest before the change of seasons that might adversely affect certain types of crops. And not every biome will experience the same type of effects caused by the seasonality of the world. The desert biome might instead of snow have significant more winds that pick up that could be damaging to more fragile types of crops if you have a freehold in that location.[20] – Steven Sharif

Resources will be different in the Underrealm.[24]