Artisan gear will boost artisans in their gathering, processing, or crafting professions.[1][2]

Gear for artisans are going to live alongside your adventuring gear. So you will currently- the approaches, and we'll test this but currently- the approach is you'll have artisanship oriented gear. This might be beneficial for your gathering; it might be beneficial for your processing, or crafting, or whatever it is- your profession. Essentially you will craft that gear, you will equip that gear, it'll live almost as a undergarment slot so to speak; and then you can activate that and it will show the appearance if you wish during the activation when you gain the benefit from the from the gear itself; and then could disappear afterwards and go back to your adventuring gear. That's the current approach. We're going to play with that a little bit. There's some discussion and disagreement on the team about how we do that, but our hopes are for Alpha two, we will have I think a couple of sets at least. We're demonstrating all of the artisanship from gathering to processing to crafting in limited fashion in Alpha 2 want to have that gear present to kind of play with this approach.[1] 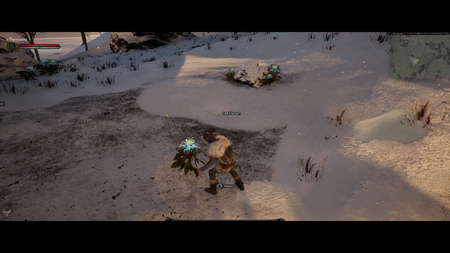 Gathering requires the creation and use of harvesting tools that enable the gathering of resources.[4][5][6]

Tools do advance within the artisan tree, so your ability to either gather, process or craft will require the equivalent tools necessary at that stage of crafting in order to accomplish the task at hand. So, you could not mine copper and mithril with the same tool.[6] – Steven Sharif

Your progression within the profession will take account what tools you can use. There might even be some opportunity to do some gathering with other players that you know. Typically in other games that I play you usually do the gathering alone. You're venturing around alone; and we wanted to take a look at maybe having a friend to help you with a two person saw on a larger tree. Maybe there's some panning that you could do as opposed to just hitting with the pickaxe. So, we'll have other tools that are part of that progression path and other activities that players can do if they would like to gather together.[6] – Kory Rice

Gathering tools for Mining, Herbalism, Lumberjacking, and Fishing are associated with a resource tier.[7][4] For example: A tier 2 axe can gather tier 1 and 2 lumber and no higher.[12]

Within each of the three parent artisan paths (Gathering, Processing and Crafting) there are different professions. A character may only ever master one of these parent paths and up to two (2) professions within this mastered artisan class (subject to testing).[13][14][15][16]

When it comes to complete mastery, we're really identifying around two or three right now, but that's something that gets play tested- something gets iterated upon.[14] – Steven Sharif

Players will have the opportunity to dabble in all of the professions at a very beginners level and then you know that gives them an understanding of what that profession feels like and then allows them to pinpoint the direction that they want to go in to master particular professions.[17] – Steven Sharif

Becoming a master Crafter or a master Processor or a master Gatherer should be a significant time investment and resource investment; and because of that it should also be something that when you achieve that status it's like people on the server know who you are.[20] – Steven Sharif

Artisan progression within the artisan tree occurs based on experience (repetition of tasks) within a branch and also via achievement of certain benchmarks within each branch.[26]

When we reference not being masters of all that doesn't mean you're not a master within your own one of the three artisan types, which is you know crafter or gatherer, processor. You will be a master of one of those, you will not be master of the other two.[15] – Steven Sharif